How do you know when your dog is playing well with others and having a good time? 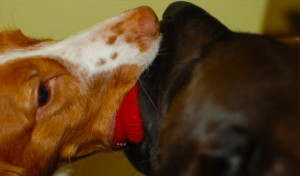 Owning a dog day care, I have seen a lot of dogs playing together. Sometimes the play is great and sometimes well, not so great. How can you tell if your dog is truly having a good time or if his “playtime” could be causing more harm than good? In general, unless a dog has had a traumatic life event, they are fun machines and love to play!

Your dog may change his mind about who he wants to play with.
As a puppy (if safely socialized) most pups will play with anyone but as they get older their play preferences can (and usually do) change. We usually see preference and tolerance changes at the onset of adolescence (about 7-9 months) and then again at the onset of maturity (about 1.5 – 2.5 years). As dogs age, they tend to get a bit more particular about their friends. Not unlike most humans really – kids will pretty much play with anyone but as adults, unless you are a true social butterfly, you are probably more particular about the company you choose to hang out with as well.  Just because your dog would play with everyone as a young dog, it does not mean he will always want to.

Play styles vary.
Some dogs prefer to wrestle and some prefer to chase. Figure out what type of play your dog enjoys most. A rough-and-tumble boxer or pittie type may be obnoxious (and offensive) to a herder. Some dogs, who have played with many different types of dogs and had positive experiences doing so, are good at tailoring their play for the dog they are playing with but some are lousy at that. If it’s a bad match, someone will end up not having a good time.

Frustration and Arousal.
When dogs play, two factors that must be present for it to be play are frustration and arousal – those factors make play FUN. They are also components for a dog fight. From a scale of 1-5, if a sleeping dog is at a level 1 and a dog fight is a level 5, play is somewhere in between (2-4). It is important to be able to “read” your dog’s arousal and frustration level so that you can keep the levels below 5 (fight!). Level 2-3 is great but when I see things going up to a 4, I want to diffuse the play. I’ll get to diffusing the situation later.

Body Language.
It is imperative for you to be able to “read” your dog’s body language and know when your dog is happy, aroused, stressed or afraid. Before you can know if your dog is playing well, you need to know exactly what he looks like when he is feeling certain ways. If you can tell that your dog is getting overly aroused, stressed or tired, you can pull him from play and prevent any escalating undesired behaviors.

What are components of good (safe and fun) play?

What are the problem behaviors in play?

Lastly, not all dogs do well playing in a group of dogs (dog park or day care) but most are able to have select play mates to interact with, even if it is just to walk together.  In either case, it is important to understand and facilitate safe, appropriate and fun play. See How to Introduce Dogs for more information on having a successful first meeting with a potential dog playmate. 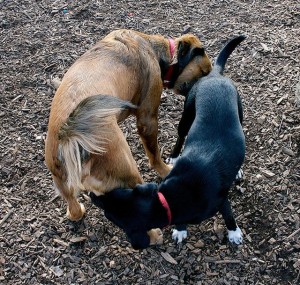