Those of you who know me well know that my first love was not actually dogs but cats, and even though I now make my living working with dogs, that’s right, your dog trainer lady is also a bonafide “cat person.”

I am currently teaching a six week enrichment class about pets for 2nd – 5th graders at my son’s elementary school and this week’s class was “All About Cats!” We celebrated cats by having a True/False Cat Facts Quiz and making cat nip toys for shelter cats in our area. Some kids also drew pics. Go ahead and test yourself to see how much you know about cats… 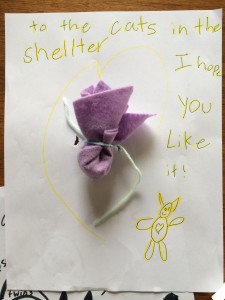 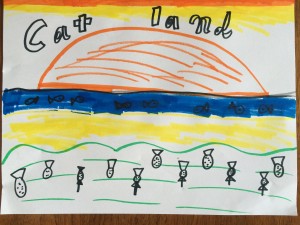 A group of cats is called a clowder. True

A group of kittens is called a kindle. True

A female cat is called a Queen or a Molly. True

Dogs are more popular than cats.  False –  In USA there are approximately 88 million cats and 74 million dogs.

A feral cat is the term for a large wild cat such as a leopard, cheetah or jaguar. False  A feral refers to a cat who has reverted in some degree to a wild state. They come from domestic cats who were abandoned or lost and then learned to live outside or in environments with little human contact. In most cases, feral cats still depend on people for their food source, whether it’s a human who takes care of a feral colony or dumpsters/garbage cans etc. Relatively few feral cats can survive only by hunting.

The average life span for an indoor cat is 13 to 17 years. True

You should give your cat a bath once a month. False – cats use their sandpaper like tongue to fully clean themselves and only need a bath in extreme circumstances (if they get into something really nasty!)

When cats walk, their back paws step almost exactly in the same place as the front paws. True This keeps noise to a minimum and limits visible tracks so they can be sneaky.

America’s cats, including housecats that go outdoors and feral cats, kill between 1.3 billion and 4.0 billion birds in a year. True

Most cats are lactose intolerant and should not be given cow’s milk. True

Cats knead with their paws when they are happy. True

When a cat rubs against you it just means he likes you. False –  well, he may like you too but it also means he is marking you as his territory with his scent glands. Cats have scent glands on the head and paws. Whenever they rub their head or paws against an object, it is as if they are leaving a message for other cats to recognize and translate.

Cats can get tapeworm from eating mice. True

Cats can get tapeworm from fleas. True

Cats have more than 100 different vocal sounds. True – Dogs only have 10.

Cats have 50 loosely fitting vertebrae, which makes their back really flexible. True – the number is variable though. They all have have 7 neck bones, 13 back bones with ribs, seven without ribs and three fused together at the pelvis. That’s 30. Cat tails have vertebrae too though, and the number varies by breed and, sometimes, individual. Cats with longer tails have as many as 23 vertebrae; those with shorter tails have as few as 18, creating a range of 48-53 vertebrae. Humans have just 34.

A cat can jump approximately 3 times its body length. False – up to 6X!

Cats never swim. False –  although cats do tend to dislike water because their fur does not insulate well when it gets wet. It is said that one breed of cat that does like to swim is the Turkish Van.

Like humans, a female cat carries her kittens for 9 months before they are born. False – cats are pregnant for about 65 days

Humans have a better sense of taste than cats and can taste more.. True –  cats have 473 taste buds whereas humans have around 9,000 taste buds.

Cats have 3 eyelids. True – the 3rd eyelid comes out from the inner corner of the cat’s eye and is also called the nictitating membrane.

A cat’s body is covered with roughly 130,000 hairs for each square inch. True

Adult cats meow at other cats to communicate with them. False  –  they only meow at humans.

Keeping a cat is good for your health. True –  it can reduce the risk of heart attack and stroke by nearly one third.

Cats have 20 toes/claws False  – they have 18 total, five toes on each front paw, but only four toes on each back paw.

A polydactyl cat is a cat with more than the normal number of teeth. False – they have a greater number of toes/claws (more than 18 toes). The Guinness record is 28!

Declawing (amputating the claw at the 1st knuckle) is illegal in at least 22 countries, including Britain, Germany, Finland, Switzerland, Australia, New Zealand, Japan and Israel. True –  with the exception of a few cities, it is legal in the USA

Cats who fall five stories have a 90 percent survival rate. True –  because of what is called a “righting reflex”.

A cat’s whiskers help him detect objects and navigate in the dark. True

Cats have whiskers on the back of their front paws. True

Humans have 6 muscles in each ear that control their outer ear movement, a cat has 32. True

Humans greet each other by shaking hands; cats greet one another by hi-fiving with their paws. False  –  cats greet by touching their noses together.

Cats have 103 bones in their bodies False– they have approximately 250 (remember, they can have a variable number of vertebrae). Humans have just 206.

A cat’s heart beats twice as fast as a human heart. True – the average feline heart beats 110 to 140 times/minute.

Cats have terrible peripheral vision. False –  they can see things in a panoramic view due to their ability to dilate their pupils. Their excellent peripheral vision helps them capture the movement of a mouse or a bird in a much wider range than humans.

Cats have superior vision but also have a blind spot. True – right under their nose about 4 -5 inches in front of their face, so sometimes they may not see the toy that is placed right underneath their chin.

Cats play with toys for fun. False  – cats “play” is actually though to be the cat mimicking or practicing hunting behaviors. 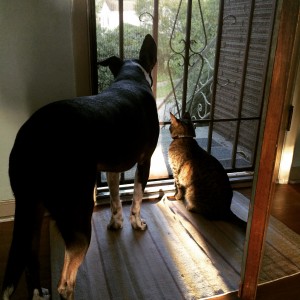